Agility training
/
May 18, 2010
/
anrkct
Last week was an incredible week for Sue and I. We were fortunate enough to play host to the Australian, Canadian and New Zealand teams in their lead up to the World Agility Championships, at the Hand Equestrian Centre in Clevedon. In fact we also had a short visit from Marilyn Adams and Tia from our British squad too, so last week we saw a lot of impressive agility at our humble training field! :-)

On Monday Sue and I welcomed the Australian team to our training venue for their first visit as they started the process of getting to know their borrowed British dogs. They deserve not only credit for arriving at a World Championship without their own dogs, but also for the way they applied themselves to getting to know their host dogs and their abilities as dog trainers. Not all the dogs were very welcoming at first, but the guys kept at it and used nothing but motivational techniques to win them round. By the time Friday came around it was hard to tell that they hadn't been working together for years, much less just one week! Aside from watching some inspiring dog training, we both feel that we have made some very great friends in the team, so a trip to Oz may be in the offing at some point - who knows! :-)

Tuesday afternoon saw the Canadian team warming up, leaving us both with some good ideas and some jump training of Susan Salo's to follow up. It was great to see them working with their own dogs, again full of motivation, but with dogs who really hung on their every word. Of course the lady I had been hanging out to meet was there - Susan Garrett with her two Border Collies Encore & Feature. They were delightfully naughty, but as driven and biddable as I've witnessed from her DVD's and YouTube clips. Really great dogs, and of course Feature is Ella's half-sister too. Tuesday evening had us along with Helen Sharp, having dinner with the team at Banwell Castle which was a great night, due in part to Nina the Canadian assistant manager plying me with wine all evening! 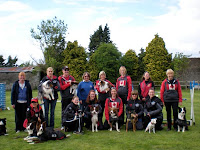 On Friday we were part of a ring party with Severnside Dog Agility Club, which was not only great fun, but also earnt us tickets for Saturday's agility action. That plus the generosity of our new Aussie friends giving us a 'Groom Australia' pass, meant that I was able to save my pennies for dog toy shopping - something that you'll notice I indulged in heavily when you next see my training bag :-)

There are many, many memorable moments from the week leading up to the World Champs and I am glad and grateful for every single one. I will be a better dog handler as a result of what I witnessed, not just the celebrations of a clear round, but also the reactions from handlers when it didn't go to plan. I am pleased to say I only noticed one dog being berated for an 'if only' round, the rest were praised and apologised to for mistakes that their handlers had made. Because when it comes down to it, any mistakes made on course are the fault of the handler. Indeed, missed contacts, missed weave entries etc. are all only down to the training the dog has received.

I have not always been proud of my conduct in the ring. Whilst I have never hit my dog for poor performance, I have been known to lose my temper before now when hormonal and tired. My frustration is usually at myself, but my teammate has borne the brunt of it. I am glad I have seen such good examples to aspire to and follow, and intend that people will want to use me as their good example in time to come.

Last week and today, I am grateful for the dogs in my life. I'm also extremely grateful Ella didn't get packed into any of the suitcases that left the country on Monday as numerous people who met her had threatened to do! :-) Even whilst she's a bit hormonal at present, she's still my top dog - as she's demonstrating below, supervising proceedings at the training field last week :-) 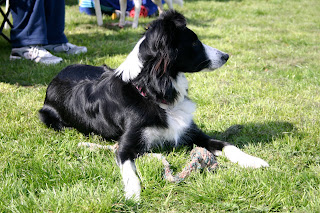 ONLINE RESOURCES TO HELP YOU SOLVE YOUR DOG TRAINING STRUGGLES